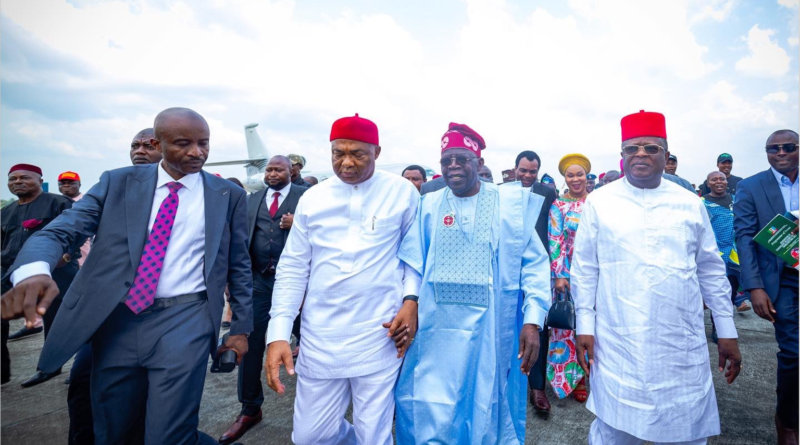 A civil rights advocacy group, Human Rights Writers Association of Nigeria (HURIWA), has accused the Imo State Governor, Hope Uzodimma of violating the provisions of the Electoral Act 2022 with the announcement of a N1 billion donation to support the 2023 campaigns of All Progressives Congress, Bola Tinubu.

National Coordinator of the group, Emmanuel Onwubiko, in a statement, on Friday, issued a 24-hour ultimatum to the Imo governor to divulge the details of the so-called “2,000 South-East businessmen” donors and the exact amount they donated in line with the Freedom of Information Act of 2015 or it would be deemed that the money was drawn from the public till and other legal actions could be triggered even if not from us but certainly from a multiplicity of groups who campaign for accountability, transparency and good governance.

The group alerted the Independent National Electoral Commission and anti-graft agencies to the contravention of the Electoral Act 2022 by Uzodimma and his so-called businessmen and charged INEC to serve them with the appropriate sanctions.

On Thursday, November 17, 2022, Uzodimma, at a Town Hall meeting between Tinubu and business leaders in the South-East zone, said 2,000 business owners across the zone have contributed N1 billion to support Tinubu’s presidential campaigns.

“However, this flagrantly violates Section 88 (8) of the Electoral Act which stipulates that no individual or group can donate more than N50 million to a candidate,” HURIWA’s Onwubiko said.

“Also, Section 88 (2) of the act states that the maximum election expenses to be incurred by a presidential candidate should not exceed N5 billion.

“HURIWA calls on INEC which is empowered by the Electoral Act 2022 to demand information on the amount donated by Uzodimma and his faceless businessmen as well as the source of the funds. Nigerians deserves to know this and the governor should release the details in line with the Freedom of Information Act 2015.

“INEC must act on Section 88 (8) that Uzodimma has already violated. The electoral body should fine him five times the amount donated in excess of the limit as recommended by the Electoral Act 2022.

“Also, the Economic and Financial Crimes Commission and the Independent Corrupt Practices and Other Related Offences Commission should work with INEC to probe Uzodimma for the identities of the phantom and non-existent businessmen tagged as donors.

“Who knows, perhaps, these are alleged proceeds of money stockpiled somewhere kept for years but brough out now that the Central Bank of Nigeria announced the redesign of three naira notes and if not, let the names of the donors be publicised and the law must take its full course. INEC and the anti-graft agencies must investigate the source of these illegal and ourageous fund to set an example to other parties mulling similar apparently dubious and unlawfully idea.

Comment on the article for thoughtful opinions will count. NN News will remove threats, harassments and other violations. If you’re having issues with commenting, please let us know